“What can we do to move people during the months they less move?” That was the question for Disney in America. And they found a motivational solution! 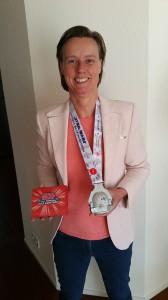 During the winter months (January, February, March) people are challenged to run or walk the distance of a half marathon. And you decide when, how long and what distance you contribute to the half marathon. So it can be done in 1 run, but for instance 21 smaller runs is also a possibility. So it is also an opportunity for those who are not able to run a half marathon in 1 run. As long as you run / walk 21,1 km / 13.1 miles. It is also not about setting a record. The most imported thing is that we start to move.

If you succeed, you wil receive a special Disney Star Wars Virtual Half Marthon medal.

And I did it! Today I received my medal. Proud!