The European Championships Athletics are coming! 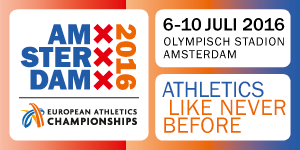 From 6 till 10 July the best athletes are coming to Amsterdam. Some facts: 51 countries, 1.300 athletes and 46 athletic disciplines. Some of the athletes are trying to reach a ticket for the Olympic Games in Rio. And of course ‘our’ Dutch athlete Dafne Schippers is one of the participants.

I am one of the 1.750 volunteers during this sports event. At the end of last year I

signed up for the position of Team Attache; the person who guides a country team. The same as I did during the European Olympic Festival in Utrecht (2013). The best volunteer job during a sports event, I think. Maybe it is also possible to be one of the two coordinators of this group of volunteers (approximately 70 Team Attachees). That would be great!

Tonight there was a meeting for the volunteers. It started with a general presentation with Yvonne Tamminga (vice director), event director Rien van Haperen and an interview with the Dutch high jump athlete Femke Pluim. The second part was focussed on a specific volunteer job. In this part I was asked to give a presentation about my own experiences as a Team Attache. Hopefully I could help the other volunteers with their expectations about this position! 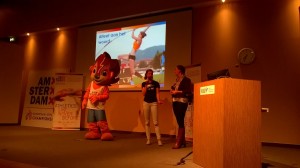 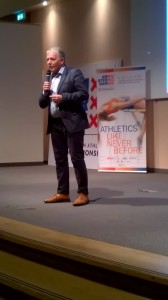 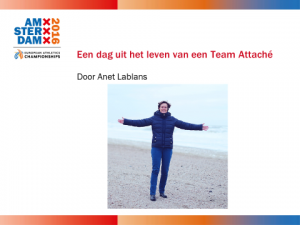